Nambale Magnet celebrated its 10th anniversary on July 26th, 2019. What an incredible 10 years! It has been an amazing journey from the first shovel in the ground on August 18th, 2007 to the first class of kindergartners two years later, to today’s campus with multiple buildings and over 430 children being educated. 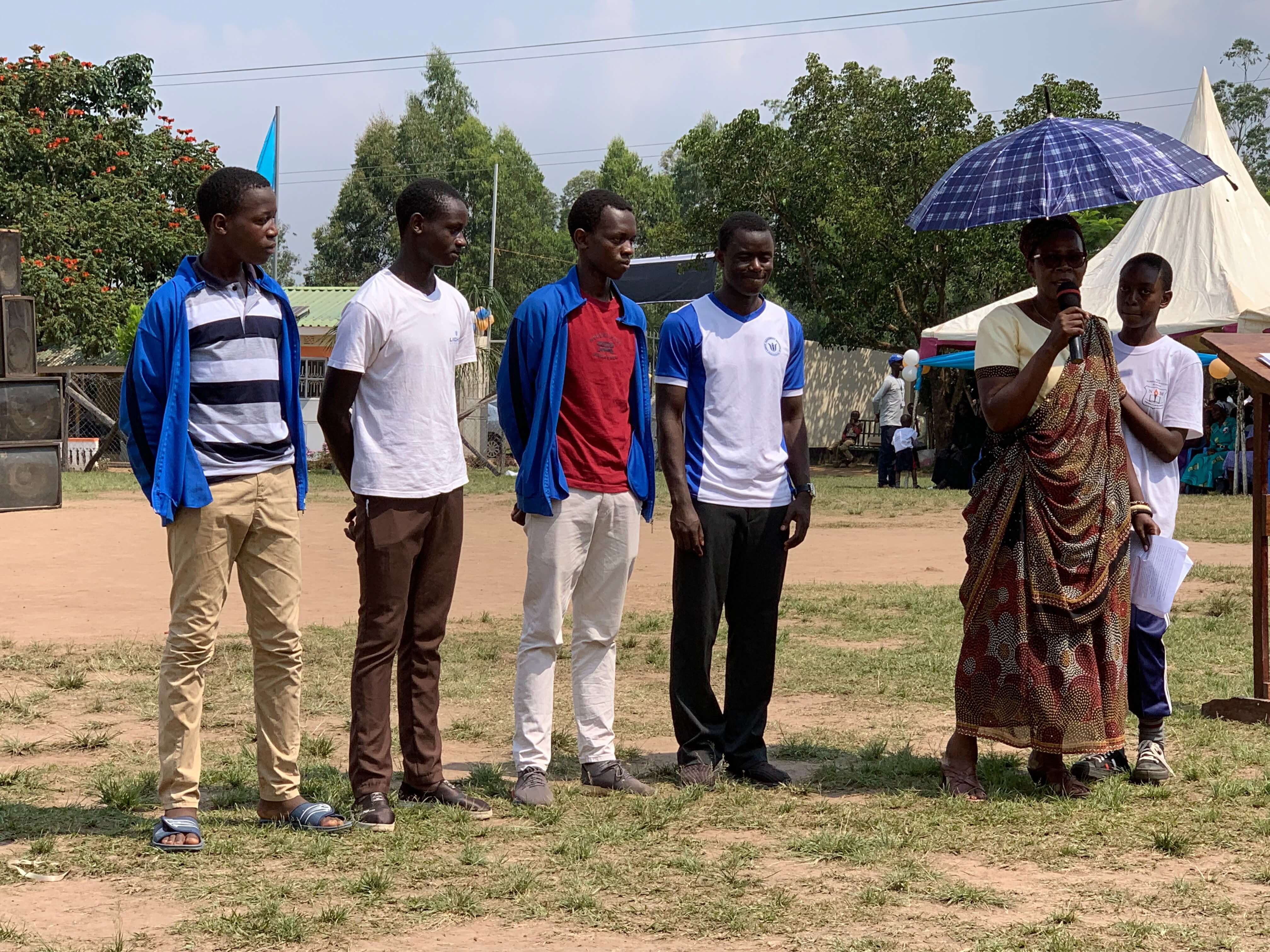 To participate in the anniversary celebration, the four students from Light Academy in Nairobi – Alpha, Jackson, Peter, and Janex – returned to the school. It was a pleasure to see what wonderful young men they have become. The four boys spent time with the current eighth graders to encourage them as they continue to prepare for the national exam (KCPE) in November. They also visited the seventh grade to stand as an example of the benefits of hard work. All four Light Academy students are holding an A average, which is required to maintain their academic scholarship. NSF is supporting them with all other school expenses.

NMS Support for the Scholars

Our NMS on-site team for the scholars includes the school founder and director, Evalyn Wakhusama, the Head Teacher, James, and the Scholars coordinator, Evin. Evin and James have been very interactive with the scholars, meeting with each after every term, and in some cases, Evin will travel to the school to meet with the students and to advocate on their behalf with the teachers. This has been a critical addition to the program, as many of these students do not have a parent or guardian to act as an advocate for them. For those students who do not have a supportive home environment, Evin has invited them to do their term break homework at NMS with support from the teachers.

Ten 2016 graduates are now in Form III (juniors) and while the top two students, Alpha and Jackson at Light Academy are doing very well, the other students are varied in their academic performance. Beatrice was able to get glasses and is improving academically, as is Oscar. Damaris has struggled with her eyesight this year, but now has glasses and we hope this helps her with her studies. Our two Eugines remain at the mid- point of their classes.

Merceline and Ian continue to struggle in class. Evin has visited both students at school and met with the relevant teachers. Evin believes that they are each in the appropriate school and both have teachers who are engaged with them and actively working to help them improve in their studies.

There are eight students in Form II – seven 2017 graduates and one 2016 graduate who did not attend school last year. Form II is typically a time of adjustment and challenge for high school students as the academic demands accelerate. Janex and Peter, who joined Alpha and Jackson at Light Academy, have both maintained the “A” average required for their academic scholarship. Brian has kept up his grades and maintains his rank among his peers (top third of the class). After solid academics in Form I, Doreen, Unicate, and Emily have slipped in their grades a bit and are being encouraged to get back to their previous marks. Derrick has struggled the most his second year, particularly in the science subjects. Evin has visited with Derrick to encourage him and to work with his teachers on next steps. Vivian missed last year but is now back at her studies, working hard to catch up from the missed time.

It is still early in the year for the 14 scholarship students in Form I. The adjustment to high school is a challenging one and we are grateful to have Evin working with the students and their schools. Most seem to be adjusting well to the rigors of high school far from home. Edgar is having the most trouble adjusting; based on his NMS experience he should be an average student, but he is struggling more than expected. Two other students, Frankline and Elder, are underperforming their capabilities, but seem to be motivated to do better. James and Evin have spent time with all three students to encourage and support them as they make this important transition. Joyce is a student who was deemed to need extra attention so she is attending a small private high school and is doing very well! Jacob, who is attending Maseno School, was selected as one of 50 high school students to travel to Nairobi for the Kenyan First Lady’s initiative called PURES, a mentorship program for top students from every county. The students spend a week at the statehouse and learn about the Kenyan government. What an accomplishment!! They will be NMS graduates before we know it! There are 14 sponsored students who will be sitting for the national exam (KCPE) in November. The current eighth graders are doing well in their preparation for the test and the sponsored learners are representative of the class as a whole. James, the Head Teacher, believes that 20 of the students can achieve a score above 400 – a superb result! Like most of the children we will sponsor for high school, their personal stories show how far they have come since arriving at NMS. Several of them spoke little or no English, and many come from single parent families. Their photos and a little bit about each of them can be found on the NSF website (nambalescholars.org).

Our board continues to be very grateful for your support and commitment to the most vulnerable children of Nambale. We are starting to see, as our graduates continue their education, the very real impact that you are making in their lives. The idea that these children, who ten years ago lived in a small village and had very little clothing and food, now find themselves at boarding schools all across Kenya is stunning. Even for those who are finding high school a struggle, the gift of this additional education enhances their future. You have forever changed their lives, their self-image and their potential.

On behalf of all of our Trustees and with deep gratitude,